Economic analysis is considered as evaluation that helps in understand the economic conditions. With an assistance of this, the number of policies and programs are being designed so that issues can be resolved. It mainly focuses on cost analysis, fiscal impact, cost effectiveness, etc (Ricard, 2016). Current report is focused towards economic conditions before price ceiling and after application of deregulation. It will provide understanding about market of tertiary education in both circumstances so that better policies can be designed to improve economic conditions. It will also present the impact of deregulation on efficiency and equity aspects.

The Market for Tertiary Education

As per the detailed study, it can be said that binding of price ceiling allow to have increase in surplus of supply and lead to decrease in economic surplus. It clearly indicates that market of tertiary education has also faced advancement in supply because it allows government to offer education services at low cost. By having effective development of price ceiling the economic impact can only be taken into account if economic aspects are less as compared to free market equilibrium price (Robert, 2015). In addition to this, it can be said that an effective price ceiling has lowered the price of education programs which has negatively impacted on the surplus of provider. It means the end price of tertiary education can also decrease which attracts citizens to prefer education after high school.

It has been noticed that supply of services was low because the demand of tertiary education programs was high due to low pricing of programs. It indicates that the price ceiling has also impacted positively on literacy rate because number of people has attracted to join programs. In this, ratio of undergraduate programs has also been increased (Nordhaus, 2010). The courses that takes up to four years were key preferences of people and students because low cost education is always a preference of citizens. It has also been witnessed that low pricing of diplomas and other certificate courses has increased the demand in great context which has negatively impacted on supply. If a ceiling is to be imposed for a long period of time, a government may need to ration the product to ensure availability for the greatest number of consumers (Perkins and Neumayer, 2015). It is one of key reason that federal government of experimentia has also focused on limiting the availability of seats in the courses so that supply can be managed in appropriate manner. It has also allowed government to make sure that availability of courses for citizens is maintained by focusing on ration of information. It has been witnessed that price ceiling increases the demand that causes supply shortage which might also create a better opportunity for black market. It means number of people has entered in market who has started providing seats in education institutes on the basis of donation (Roberts and Kingsbury, 2008). People that are not qualified but rich by nature may create black market for the programs. It might affect the effectiveness of education system in negative manner so government need to ensure on it.

In addition to this, it can be said that application of price ceiling in tertiary education has enhanced the level of government contribution in education system. It has increased the level price ceiling and decreased the economic strength of Federal Government of Australia. Government contribution is really high in context to dentistry that increases the demand and decreases the level of supply. It means government need to take initiatives so that supply and demand can be managed in appropriate manner. 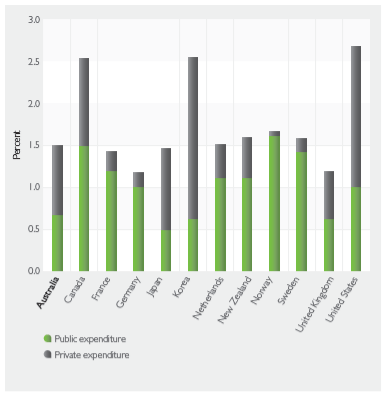 Download Full Sample
Cite This Work To export references to this Sample, select the desired referencing style below:
Assignment Prime.(2022) Retrieved from: https://www.assignmentprime.com/free-samples/economics/report-on-economic-condition-australia
Copy to Clipboard