The information collected in the following information deals with the effectiveness of communication process along with its importance to achieve success in the business world. As indicated by Manisaligil & Bilimoria (2016), good communication in terms of business deals with the continuous flow of words among both the employees and their managers. This continuous flow of communication always benefits the concerned organization, for gaining accurate conditions of the raised issues within the workforce. Moreover, by catering an effective business communication, an organization gains clear expectations from their employees and the other related workers. Thus the requirement of an effective communication process in

Issues faced by the business

As indicated by Oschatz & Klimmt (2016), the issues that are further faced by a business organization deals with the factors as mentioned in the below discussion

The organizations that do not share their daily activities in oral aspects undergo different misunderstanding in their daily life. The strong relationship that was to be established between the employees and their managers gets to weaken dues to the lack of an effective communication.

Due to lack of an effective communication, the decisions that are made by the organization gets confused. As a result, of the above employees further becomes unable to strategies their efforts to the pathway of positivity. 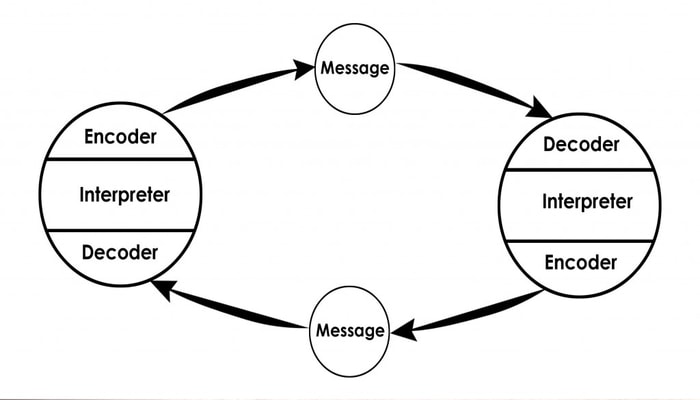 Therefore, by the application of the above-described model of communication, the concerned organization can easily decoded the encoded messages that are catered in terms of communication.

Measures for the Issues

In order to solve the issues raised in the workforce of an organization, the application of the Schramm’s Model of Communication, the organization would further gain the proper communication process for taking future decisions. Therefore, the role of an encoder, interpreter along with the decoder is inter-linked with each other. In other words, the messages as catered by the encoder or the sender in an organization are further decoded by the receiver. As indicated by Finne (2017), the process of understanding the meaning of the received, message or communication is said to be the message being decoded. Therefore, the role of both an encoder and decoder is to analyses the information received. Theses process of analysis further involves the feedback that is received by an organization or the fresh news that is again recorded by the managers of an organization. Moreover, for making a communication process an effective one,; the concerned organization must provide training to their employees at the time of their recruitment. Therefore, by training the new candidates, the organization would further emerge in the nourishment of a qualified employee for the taking the job responsibilities of an organization. Thus, the role played by an effective communication is no less than news that must be fetched to the employees of a concerned organization for enjoying a constant growth.

From the above discussion it can be further concluded that the application of the Schramm‘s Model of communication within the business environment. The managers and the employees of the concerned firm would gain more feedback that is positive from their customers.