Nike runs with the " just do it" mindset, and this is also the company’s tagline. It is the most renowned brand all over the world and is known for its high quality products and dominant influence power. However, like any brand, Nike has its strengths and weaknesses, and has to rise above all threats to seize every opportunity possible.

With the help of Nike SWOT analysis, we will conduct a thorough research of the company, but first, let's go over the details of Nike Inc.

A Walk Through Nike’s Origin

Nike Inc. is a US multinational company. Its headquarters is situated in Beaverton, Oregon, USA, and was founded by Bill Bowerman and Phil Knight. Nike manufactures athletic wear such as footwear, apparel, and various other sports related accessories. Below mentioned are some insights about the company that will provide a more detailed look into the company. 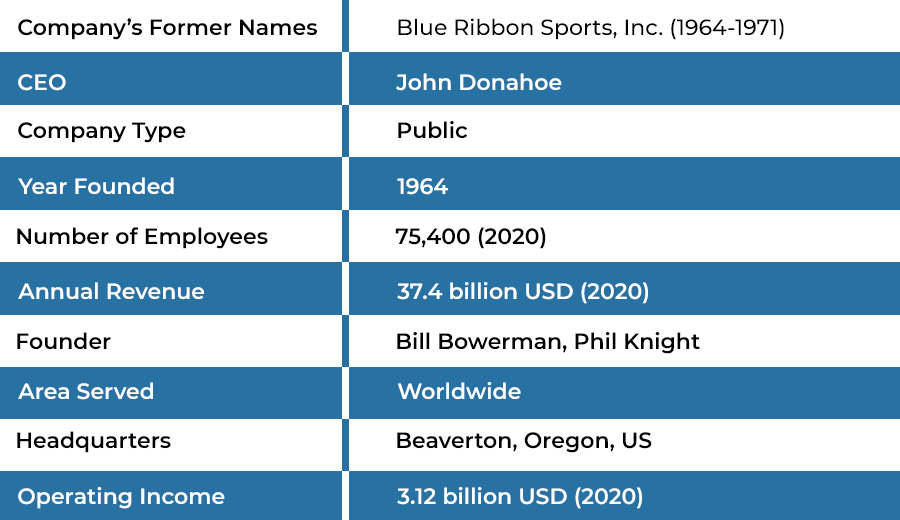 Nike is a company that is famous on a global level, but here are 7 mind blowing Nike facts that are rarely known by an average person:

Nike SWOT Analysis will show us the strengths and weaknesses that are restricting the company’s progress, and, at the same time, help us identify the opportunities and threats that are present in the current market condition.

Nike is known worldwide, and for this reason, it has a large customer base that follows all of Nike’s trends, participates in its activities, and also provides customer feedback. According to our expert sources, Nike’s market cap is around 263.55 B.

Nike manufactures more than 60% of its products overseas. In the financial year 2021, Vietnam manufactured 51%, China manufactured 24%, and Indonesia manufactured 21% of Nike’s footwear. Other production centres are based in Brazil, Italy, Argentina, India, and Mexico.

Michael Jordan, Tiger Woods, and LeBron James, are just a few names that collaborated with Nike and helped the company collect a vast number of buyers. These endorsements are a crucial part of Nike.

Nike is a household brand in every major part of the economy; it’s easy to pronounce, and it's a catchy and unique name. It’s swoosh symbol, which is inspired by the Greek goddess of victory, can be recognised by everyone. The brand value of Nike is approximately $213.17B.

Dependent on US Market:

Nike even after being globally recognized, is mainly dependent on American markets in terms of revenue and sales. In the last financial year, Nike sales in the US were about 17.36 billion dollars, which is about 41% and the rest from other parts of the world.

Even though Nike's profit and loss statement shows that it is record breaking, a quick glance over its balance sheet will show that the company is going under a lot of debt.

Nike has been consistently in talks on the topic of poor labour conditions. These issues include child labour, forced labour, low wages, etc.

Nike only focuses on sports apparel alone. This over-dependency is a major weakness. The brand needs to give its attention to other clothing styles too.

Although Nike is present in various foreign countries, there are still numerous of opportunities. This is because emerging markets like Brazil, India, China, etc., are evolving gradually.

Recently Nike has adopted a new strategy to directly sell products to customers, opening its own retail stores and creating its own website where customers can easily customize their shoes which gives them a whole new buying experience.

Nike can grab the opportunity of various new technologies such as the Metaverse and the augmented reality(AR) world.

The business of athletic wear has a lot of rivalry in it, even though Nike is the leading brand. It still faces competition from other brands like, Adidas, puma, Reebok, the north face etc.

One of the major threats to Nike is that its fake products are easily available on the market that makes the customer confused and this further creates patent issues with various other companies.

Regardless of the type of business, a company, no matter how good at handling its trade, is always susceptible to the negative effects of an economic recession.

Companies such as Under Armour, Puma, and New Balance are raising their marketing and advertising budgets, putting pressure on Nike.

This here completes everything about strengths, weaknesses, opportunities, and threats. And concludes our SWOT analysis of Nike.

Still Couldn’t Get Your Head Around Nike SWOT Analysis? Experts Are Here!

The first stage in conducting a Nike SWOT analysis is to gain a thorough understanding of the brand. Nike is a well-known sportswear brand that produces high-quality footwears and apparels. It is endorsed by athletes such as Cristiano Ronaldo, Neymar, James LeBron, and Rafael Nadal. The company was founded in 1964 and became successful after a few years. The company now has retail locations in over 170 countries and offers online services as well. One of the most well-known logos in the world is Nike's Swoosh.

SWOT Analysis is a technique that can heighten your chances to achieve more insights into a company. But if you are still confused with it, then leave it to us. Our experts of Assignment Prime, have been writing SWOT analysis for various companies and have detailed knowledge of this topic. They know how to structure a SWOT analysis and if you are assigned with the task of conducting a Nike SWOT analysis, you can hire our experts for this purpose. That's not it; we also provide amazing benefits and guarantees with our services such as:

And there are many more which you can learn about from our experts. So, what are you waiting for? Reach out to us NOW and grab the best deals.

Apple SWOT Analysis That Will Reveal the Truth

SWOT Analysis and How to Do It Right! [With Examples]

Apple SWOT Analysis: Everything That You Need to Know