Pros and Cons - Expansion of Operations of Duque Papetiers Gros

The stationery sector of Germany has gained very good position in market. As it has created different innovative products and services by various consumer preferences and habits. The present report is giving brief discussion about organization who is dealing with different stationery products and service to small shops, schools and offices as Duque Papetiers Gros. This organization has equipped the best image and trust along with reliability. The present report is stating various pros and cons of expansion of operation in countries such as France and Belgium.

Germany is well positioned in terms of present stationery market. The total turnover of this particular industry is more than 14.8 billion per year as per report of Trade association for writing and office supply. It is equal to every individual's spending which is specifically more than 182 annually. Germany has seek second position in context of spending for basis of stationery as 35.2 which is applied for writing and drawing materials in European Union countries. In the year 2014 and 2015 industry got raised by 3.5% (Schmidt, 2016). So in terms of result demand will be increased by 2.5% and it will be rising from abroad as well of 5%.

Germany has gained the best position in worldwide in industry of stationery brands. In context of significant market shares it is giving positive aspect along with image in market which is not in favour of private labels. There is presence of very broad range of various products with different challenges along with development. The paper and its product's turnover is decreasing day by day as its growth rate is reflecting positive side along with growth in office supplies and various instruments for writing in year 2015 by 5%.

There are 2200 wholesale organization which are operating in industry of stationery and 50% are giving turnover which is less than 500000 as it includes wholesalers of selling paper, office supplies and writing instruments. There is presence of different business intermediaries who are providing direct to commercial customers. Many wholesalers have reduced there operations because of various merger of stationery wholesalers and many of them left market as well.

As per research stationery industry of Germany is growing as it has positioned itself in very appropriate manner. 14.8 billion is total turnover of per year of this particular industry, it has been stated in this trade association report. Each and every individual has spending equal which is above 182 annually and particular contribution of 35.2 was spent on writing and drawing materials (Nakagawa, Johnson and Schielzeth, 2017). While observing per capita income, Switzerland has gained top position by 34.5 and in same series Germany has equipped second position which is followed up by Austria. The European countries like France and Germany's spending has been accounting below in graphical format. For increasing annual spending, special focus has been given to various promotional aspects and online services by Duque. The published data of HBS states that there is decrement of 11.9% and it will be leaning towards negative impacts on basis of writing and drawing material and revenue as well.

For determining sales of Duque there has been applicability of sum formulae and through that it had justified revenue of sales. The sales of year 2015 is replicated as 16500 and in next year 2016 it got increased up to 182000 but due to some reason it decreased in next year 2017 up to 178000. In context of assessing growth, it had given impact of 10.30% but in next year it had fallen from 2.20%. While assessing sales it has been also identified that Duque has major requirement of giving special emphasis on various promotional strategies and to control cost for generating sales (Auplish and et.al., 2017).

It has been clearly viewed that sales are falling downwards because of general office supplies and printer cartridges of year 2016 to 2017. it was about 14.81% and 15.38% respectively. For generating more sales, there is requirement of imposing different actions on basis of these products and for adoption and modification. 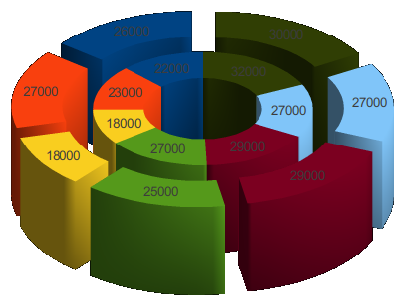 3.3 Reflecting correlation of sales and year

Interpretation: The interrelationship of both variables can be represented by correlation as in context of interpretation the movement of single variable can be determined in this measure (Hittner, 2016). It is directly represented in tabular format which is indicating both sales and year whose correlation is 0.73 which is giving negative association. It can be also elaborated as the year is moving towards simultaneously sales will increase in significant manner.

Interpretation:The above table is giving brief representation of different advantages and disadvantages on basis of expanding its operations in other countries such as Belgium and Germany. By observing feasibility of business it has determined its pros and cons in developing its basic framework in very systematic manner which will be helping Duque for attaining success in other countries.

Duque has to expand its business operations in various countries such as Belgium and Germany so it has to adhere different international standards such as:

5.1 Justifying monthly cost of repayment of mortgage of 30 years

5.2 Justifying application of interest rate of each month

The average order value has been justified by calculating Z score value. The insights have been highlighted with help of absolute value as in same perspective distance took place in mean of raw and population and its standard deviation.

There is presence of no difference in actual order's mean value and expected value.

There is presence of difference in actual order's mean value and expected value.

The value of Alpha has been given for selecting or disqualifying hypothesis is 0.5.

Interpretation: The above numbers are giving quantitative information about Z score value as it has set standard limit such as 0.05. In simple word it can be elaborated as selection of null hypothesis is done against alternative hypothesis as there is presence of no difference in actual order's mean value and expected value. It can be explained as mean of order value is same on basis of both categories like budgeted or actual.

The information has been tracked in month of December by survey methodology. It will be according to needs, desire and expectations of majority of consumers. There is presence of various respondents who fills questionnaire but for very minimum percentage which is not termed as most appropriate situation. For improving interest in respondents about survey, they must select target people who are well aware about full information about title of survey (Schoenfeld, 2016). Duque must be able communicate the advantages about outcomes for filling questionnaire in very effective manner. As respondents must be aware that there feedback will be used for framing various strategies and along with it they must be ensured that this information will be secured and confidential.

The survey responsive rate can be improved by applying understandable language and in concise format. The most important thing should be considered by every organisation that it should be able to access by each customer base. The email address must be in very similar format which is used for sending questionnaire so that it will be very easy for customers to reply on same so it will lead to save time and easily accessible (Lazer and et.al., 2014). In the present era, everybody like to achieve goal but with shortcuts so in the same basis survey should be prepare in short format so it will be increasing quality and quantity as well.

Interpretation: The above table is giving information about descriptive statistics of 20 respondents imply level of customer service, quality of product and sales staff of Duque is represented as good staff. The median and mode of sales staff and customer service is 4 as it can be interpreted that excellent remark has been given to Duque by half of data set. The mean of price value is 1.95 indicating items of rated service of Duque. The high level of customer satisfaction has been evolved by loyalty of organization and basic need of giving major focus on controlling cost.

From the above report it can be concluded that Germany has gained huge market share in industry of stationery and even well position. It can be easily viewed that expansion of its business can be done in countries like Belgium. The expansion will lead to increasing customer base and profit margin via its efficient operations. It can be viewed from report there is requirement of focusing on product's quality and diversification strategy. It can be articulated from report that it has negative correlation so fluctuations of sales are not linked to economy of market. Germany has to work hard for achieving first position so in this context it had to find weakness of leading country Switzerland and work on its weakness.

The level of spending is high with context of customer along with comparison to writing and drawing material. It can be easily articulated by observing various pros and cons of expansion so huge proportion is stated in pros, so it can expand its operations. It has stated importance of different international standards in context of expansion in other countries and environment standard had laid huge importance. There is huge requirement for Duque for evaluating special focus on modification and revising of the framework policy which is existing. Further it can be summed up by attracting more consumers by setting prices in very competitive manner of all stationery product.

Download Full Sample
Cite This Work To export references to this Sample, select the desired referencing style below:
Assignment Prime.(2022) Retrieved from: https://www.assignmentprime.com/free-samples/operations-and-project-management/qab020c415s-pros-and-cons-expansion-of-operations-of-duque-papetiers-gros
Copy to Clipboard