The main motive behind conducting present study is to assess the impact of cognitive resource availability on customer decision making in the context of counterfeits products. The present report is based on data set related to resource availability, intention and justifiability to purchase counterfeits. In this, report will shed light on the manner in which statistical tools and techniques help in testing hypothesis and presenting the suitable view of research problem.

Methodology: In the present study, quantitative research type has been selected for presenting the suitable view of issue. For doing quantitative investigation appropriately and presenting suitable solution of issue statistical tools have been used. Different tests such as ANOVA and process Andrew have been applied for testing concerned hypotheses. ANOVA tool helps in assessing whether significant difference takes place in the mean value of concerned two variables such as DV & IV or not. Further, mediation model helps in making estimation about the indirect effect of independent variable on dependent through including mediator as a variable. Hence, by undertaking Hayes and Sobel test impact of independent variable on dependent has been assessed by including mediator such as justifiability to purchase counterfeits. Along with this, test moderation effect has also been performed with the motive to assess the impact of one variable on another when moderator is included.

Hypothesis 1: Participants will be more likely to show higher intentions of buying counterfeits when their cognitive resources are unconstrained than when they are constrained. 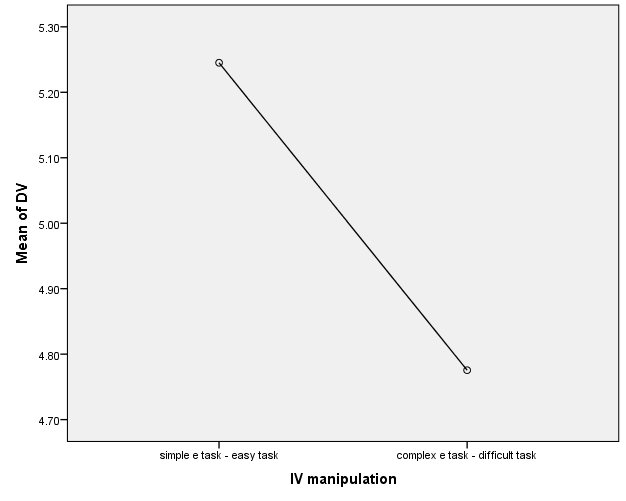 Interpretation: Outcome of descriptive statistics show that mean values in the category simple and complex task implies for 5.24 & 4.78 respectively. Further, ANOVA table shows that p = 0.05 which means null hypothesis cannot be rejected. Hence, referring assessed significance value it can be presented that difference takes place in the mean values of dependent and independent variables statistically. Thus, it can be presented that intention pertaining to purchase counterfeits is affected from the aspects of resource availability.

Hypothesis 3: The level of accountability will moderate the impact of resource availability on the intention of buying counterfeits.

Hypothesis 3a: When participants have a high accountability, they will be more likely to show higher intentions of buying counterfeits when their cognitive resources are unconstrained than when they are constrained.

Hypothesis 3b: When participants have a low accountability, they will show higher intentions of buying counterfeits regardless of their cognitive resources availability. 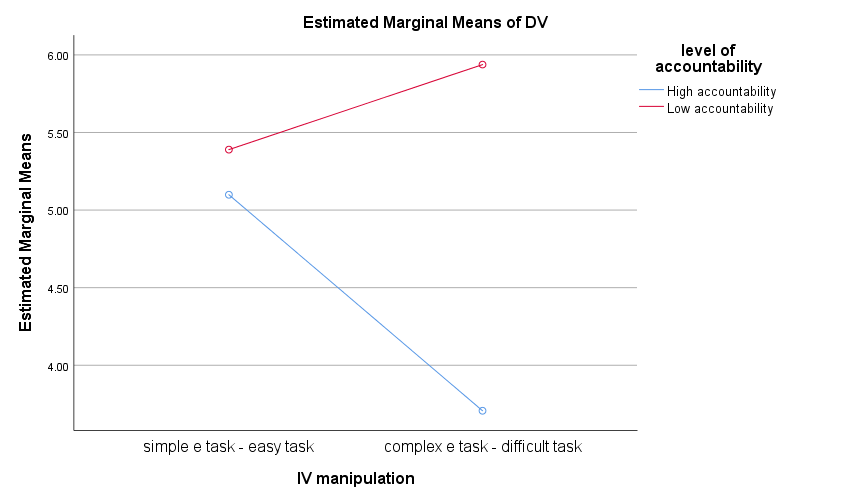 Interpretation: By applying the tool of regression analysis on the concerned data set it has found that null hypothesis could not be rejected. ANOVA table shows that p value is in line with the standard value such as 0.05. Thus, referring the results of regression it can be presented that level of accountability will moderate the impact of resource availability in the context of intention regarding buying counterfeits.

Hypothesis 4: The effect of H3 will be mediated by “Justifiability to purchase counterfeits.”

Conditional direct effect(s) of X on Y at values of the moderator(s):

Conditional indirect effect(s) of X on Y at values of the moderator(s):

When the moderator is dichotomous, this is a test of equality of the

Interpretation: From statistical evaluation, it has assessed that p value accounts for 0.00. Hence, it clearly presents that assessed value falls below the range of 0.05 respectively. Thus, by taking into account all such aspects it can be mentioned that alternative hypothesis is true over null. Hence, it can be entailed that the effect of H3 will be mediated by justifiability in relation to purchasing counterfeits.

The intention to purchase a commodity by workers will be effected in relation with managing the business operations. Therefore, factors which affect their decision in terms with purchasing a commodity are mainly associated with the costs as well as available resources for operations. Moreover, here consumers are very price conscious as they make their decision accordingly counterfeits. Accountability in between resources and costs which will mainly affect the buying decisions of the consumers. Designing of products and services will also affect their moods and decisions accordingly. Thus, implicating such changes will have adequate control over operational practices as well as management of operations. Mediator defines the mid value of the observation which comprised with the adequate analysis as well as various operational control over the outcomes. Buying behaviour of buyers will be adequate as per monitoring cost efficiencies and designing of products meet the satisfactory level of firm. Company produces the goods and material which is based on the availability of sources to have adequate control over the operational practices as well as brings suitable revenue. However, the availability of the resources brings reduction in costs which will also be effective as the prices levied on such products will be cheap and easily affordable by consumers.

According to Kim, J. & et.al., (2018), Mediation analysis is a Hypothesized casual chain which in turn affects Two variables that will later affect the third variable. Whereas, “M” is a mediator which act a median or mediates the relationship among predictor and outcomes. However, there has been determination of techniques which in turn helpful for resolving the four issues that will affect the statistical outcomes. To analyse outcomes from mediation techniques with assists the favourable outcomes. Good things behind implicating their technique is that it is totally inexpensive as it can be performed and used by any managerial professionals in terms with analysing the outcomes. Promptness in bringing the suitable outcomes in a most simplified manner. Therefore, these will be effective in terms of bringing the suitable returns and gains to business. It has assessed that, mediation analysis does not always reflect the best outcomes to settle any agreement. However, it comprises with various steps and a technique to analyse the outcomes on which the 1st step is consists of determining the causal variable is correlated with results. Thus, on which Y will be determined as Criterion variable and X as predictor. Thus, it impacts and establishes the effects which may be mediated.

In the 2nd step here the causal variable will be correlated with mediators on which it can be treated as the outcomes from the mediators. Similarly, in relation with analysing further the 3rd step comprised of factors that the mediator will affect outcomes variables. Therefore, it insists that the causal variable must be executed in establishing effectors of mediation on derived outcomes. In addition to ascertaining the impacts of “M” which will be adequate and helpful as per determining the relation in between X & Y variables. As per the views of Kim, J. & et.al., (2018), Implication of mediation techniques will be assistive in terms with defining the relation between X and Y variables. Thus, it can be aid that if all four steps were meet in outcomes which reflect that the data set is consistent with a hypothesis and variable to completely mediate the X-Y relationship. Moreover, it can be said that, usefulness of this technique is that will bring suitable analysis over outcomes and defines the relationship between two variables to predict the third variable.

On the basis of above report it has been determined here that using Mediator analysis will bring the effective measurement over the analysed outcomes. It can be said that these techniques reflects relationship between availability of resources and intention to purchase counterfeits. Moreover, it will be suitable methods which are needed to be implicated by a firm in terms of making suitable control over the operational activities and bring executable control over variables. Moreover, in accordance with such observation it has been decided that there will be suitable relationship among available resources and intention to purchase counterfeits.

If you are looking for a professional to do my assignment at highly affordable price then you can ask for our help.

Download Full Sample
Cite This Work To export references to this Sample, select the desired referencing style below:
Assignment Prime.(2023) Retrieved from: https://www.assignmentprime.com/free-samples/research-project/impact-of-cognitive-resource-availability-on-customer-decision-making
Copy to Clipboard